My son and I were off from camp and work, respectively, on Friday and had the chance to go into Boston for the day. It was beautiful weather, with calm seas. It practically felt like fall with temperatures mostly in the 70s, or a little higher, versus some 90 degree August heat we more typically get. Thanks to the kind folks atClassic Cruise Lines in Boston, we were given the opportunity to sail on theirschooner the Adirondack III. 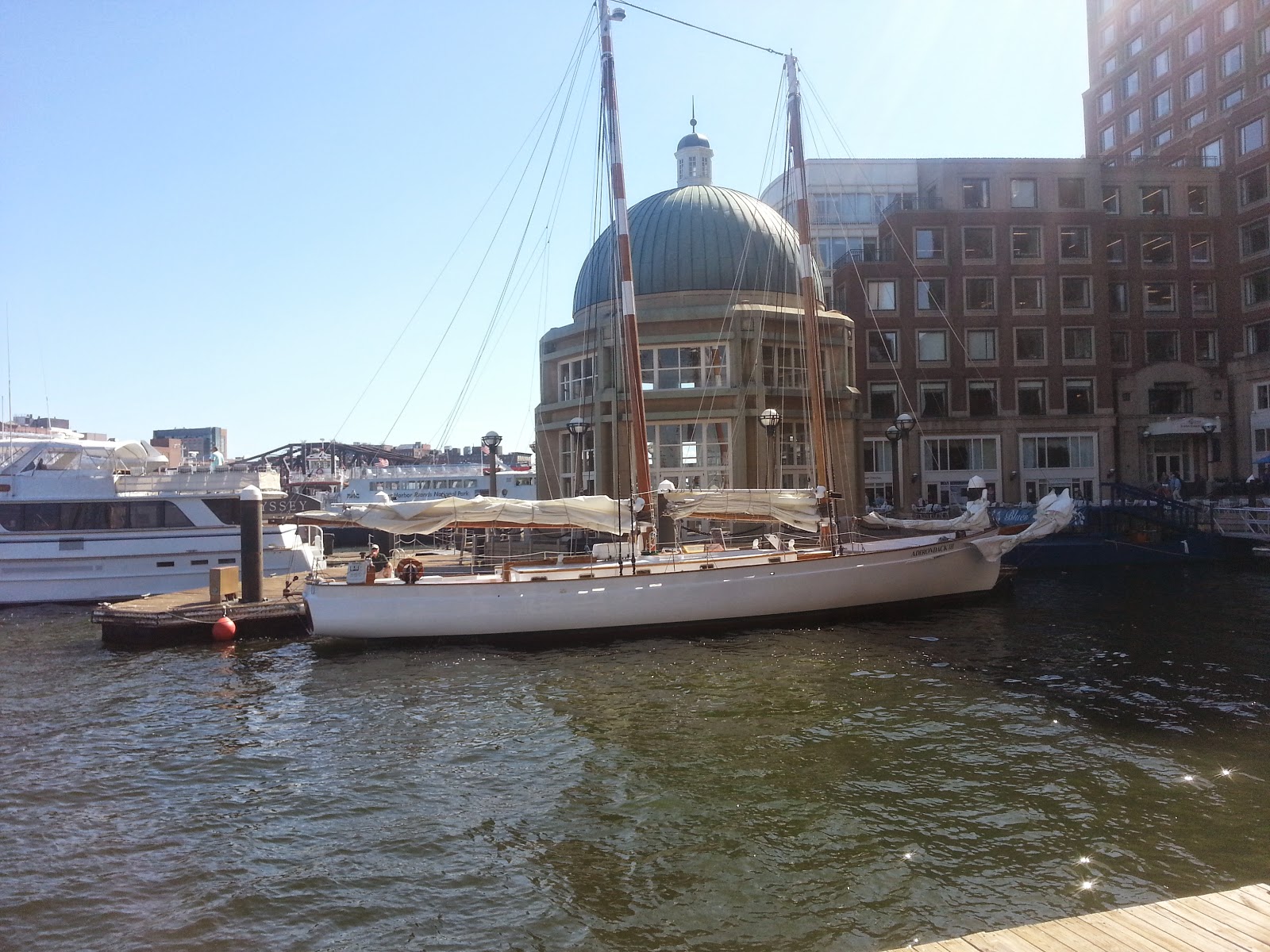 The schooner is an 80 foot long boat with two towering Douglas Fir masts and roughly 2,000 square feet of sail. It doesn't look like much when sitting in the docks. but there is a slight problem. With the exception of a ferry boat a couple weeks back, I haven't been on a boat in close to twenty years, AND I always got seasick whenever I was on a boat. Yes, like you, my wife thought I was nuts to go out on a boat for a two hour trip, knowing that I was probably going to puke my brains out. 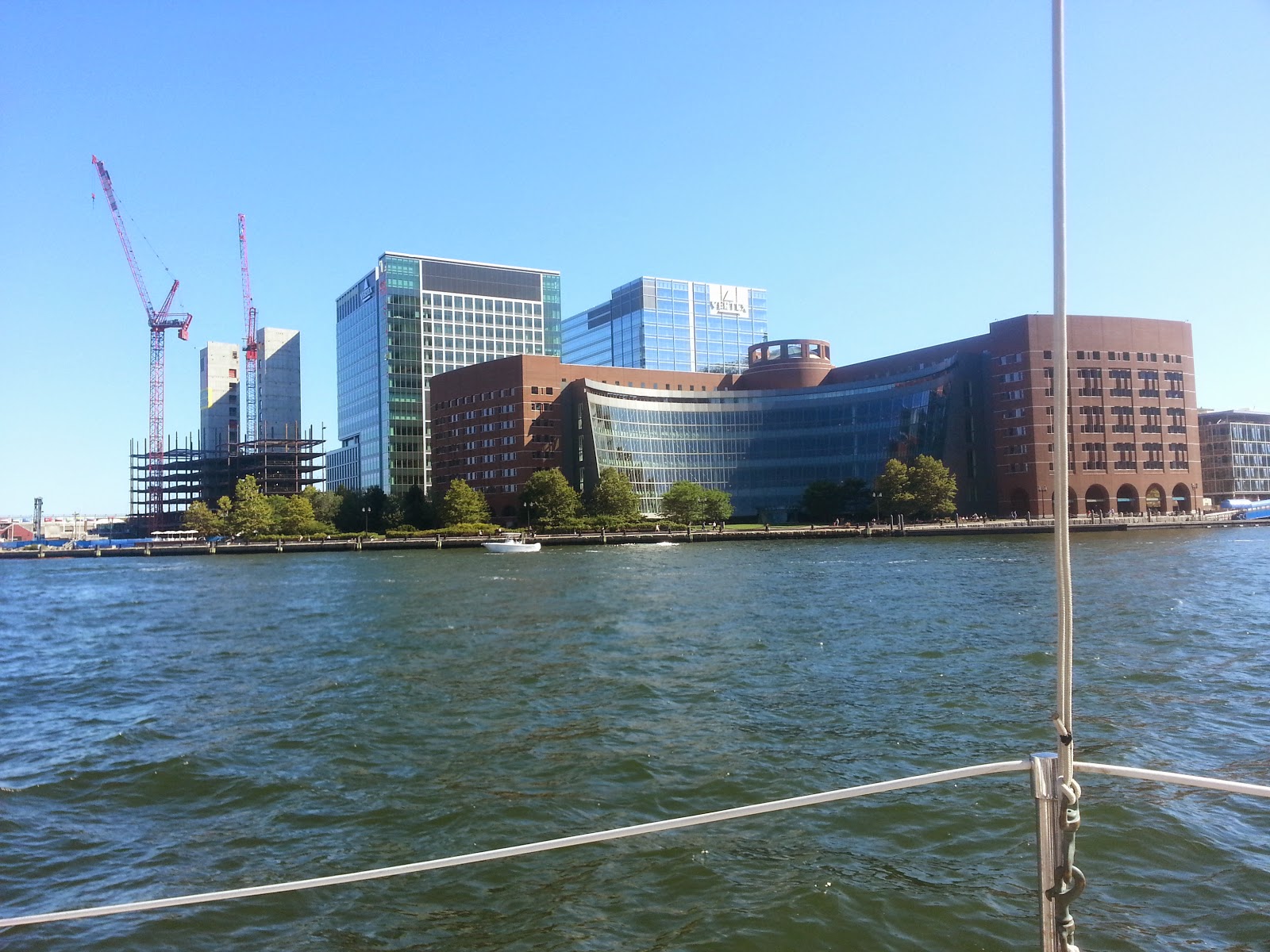 Now that the trip is over, I'm happy to say that the worst didn't happen. My son and I enjoyed a fantastic two hour trip traveling around Boston harbor. After going out of the docks on motor power, they quickly put of the sails. 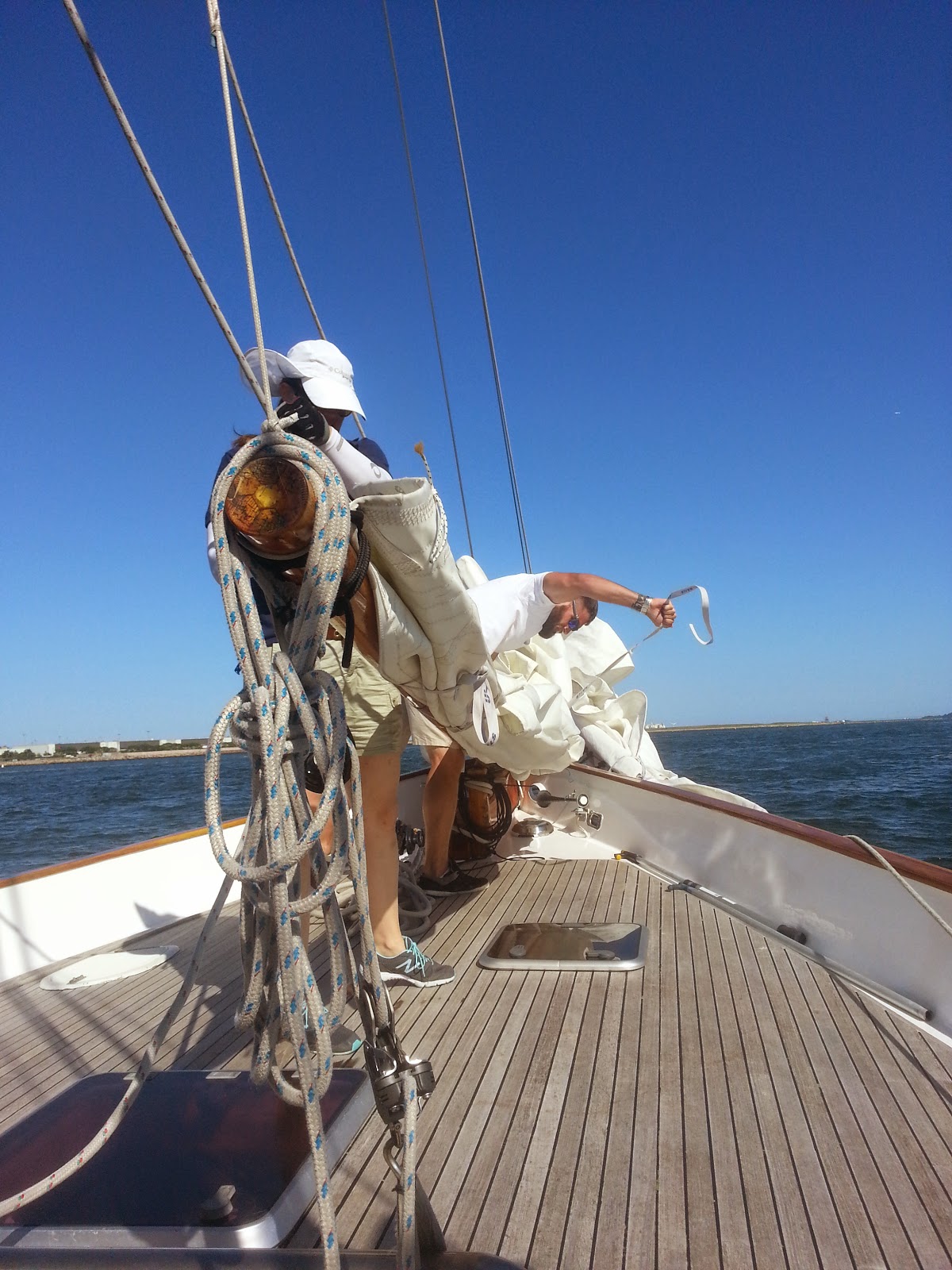 After the sails are up, you're free to move around. The crew brings around a free round of drinks (water and soda) and offers beer and wine for $5. And, if you happen to get cold, they'll provide blankets all around. There are life jackets available, but you don't wear them during the journey. Basically, just sit back and relax for the two hour trip and enjoy the ride. 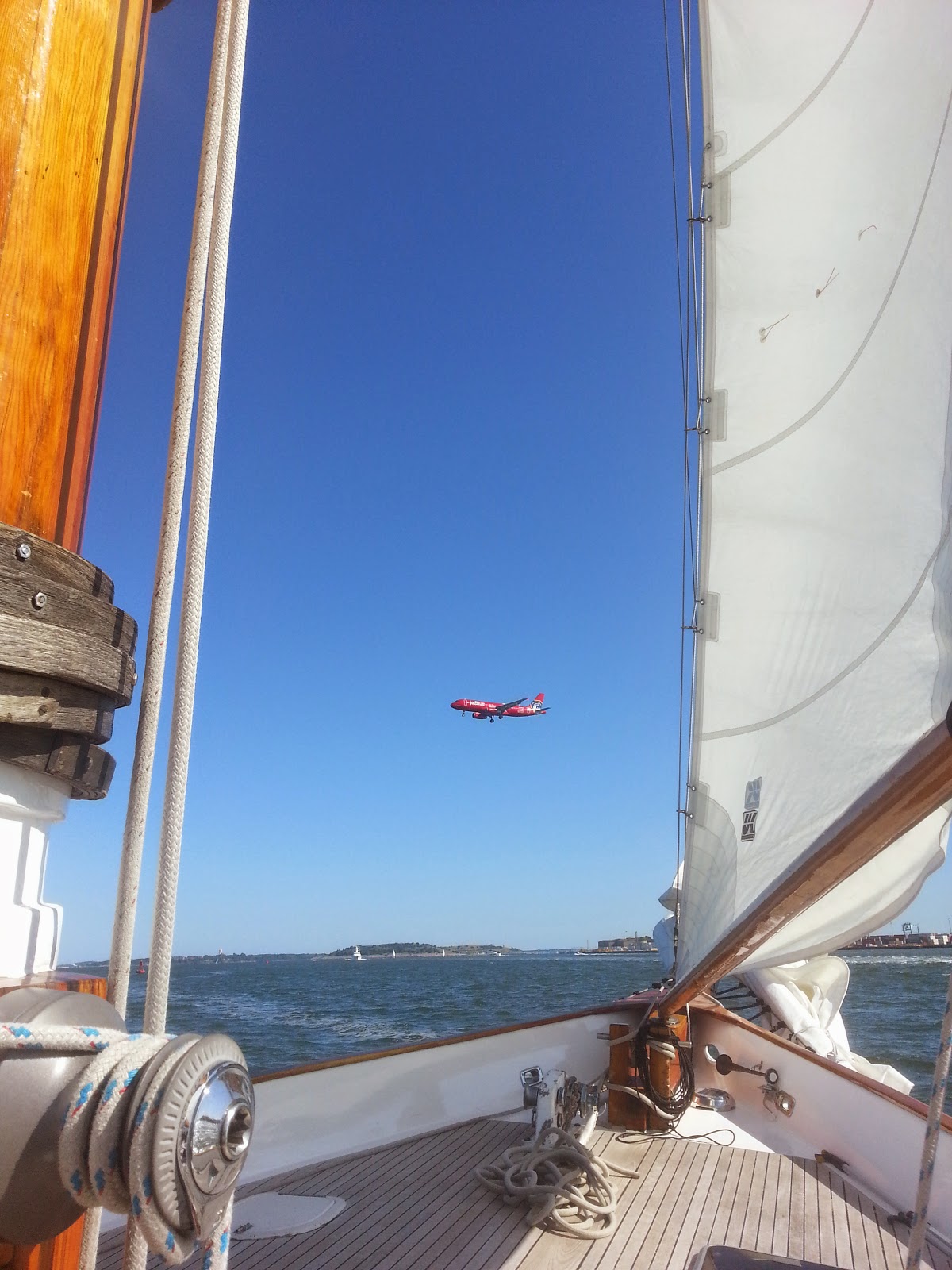 The boat travels around the Boston Harbor Islands National Park area. This includes sailing right under the flight path for Logan airport. 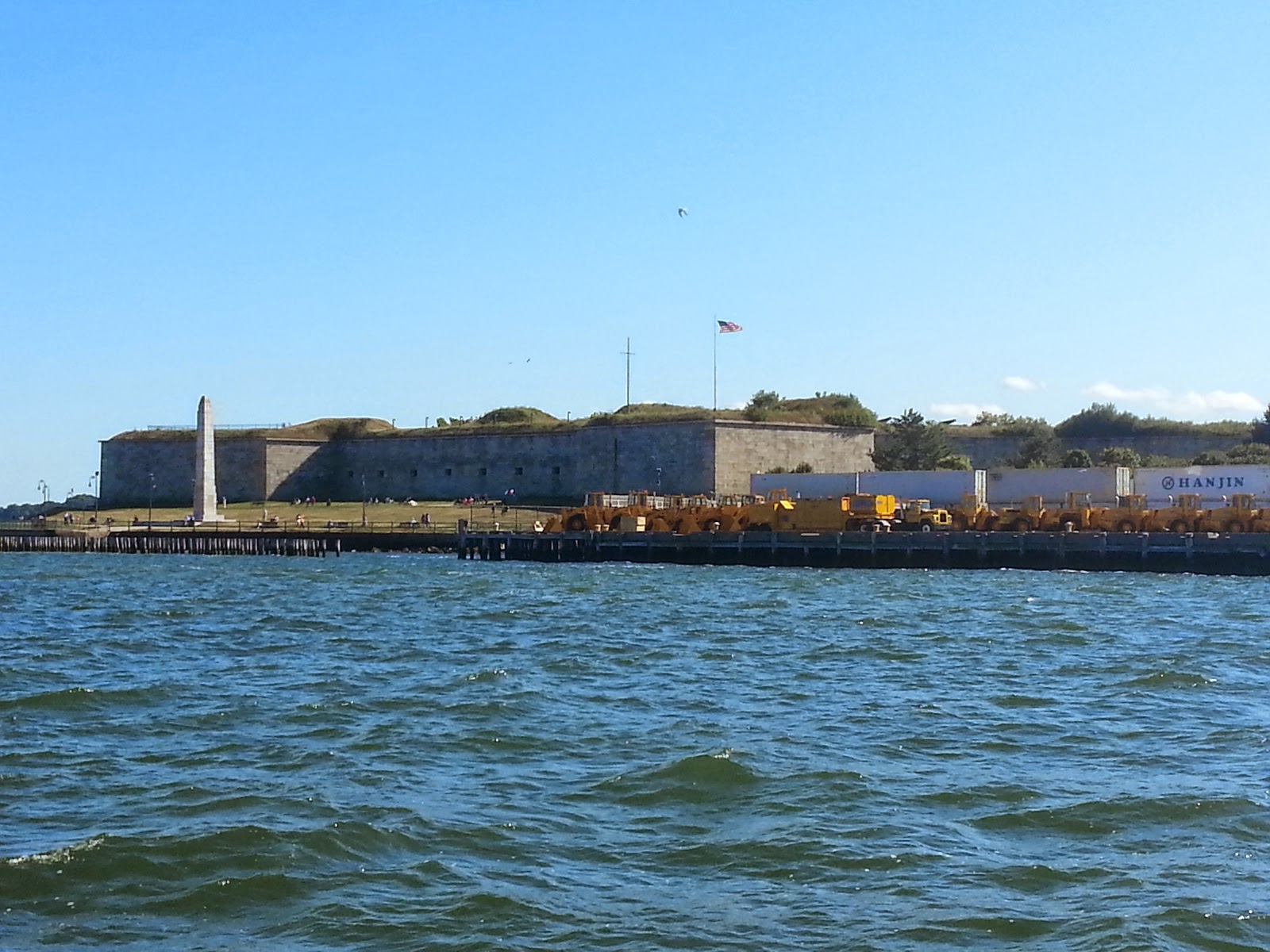 It goes by Fort Independence where Edgar Allan Poe once served. Apparently some folklore from the fort inspired his story The Cask of Amontillado. 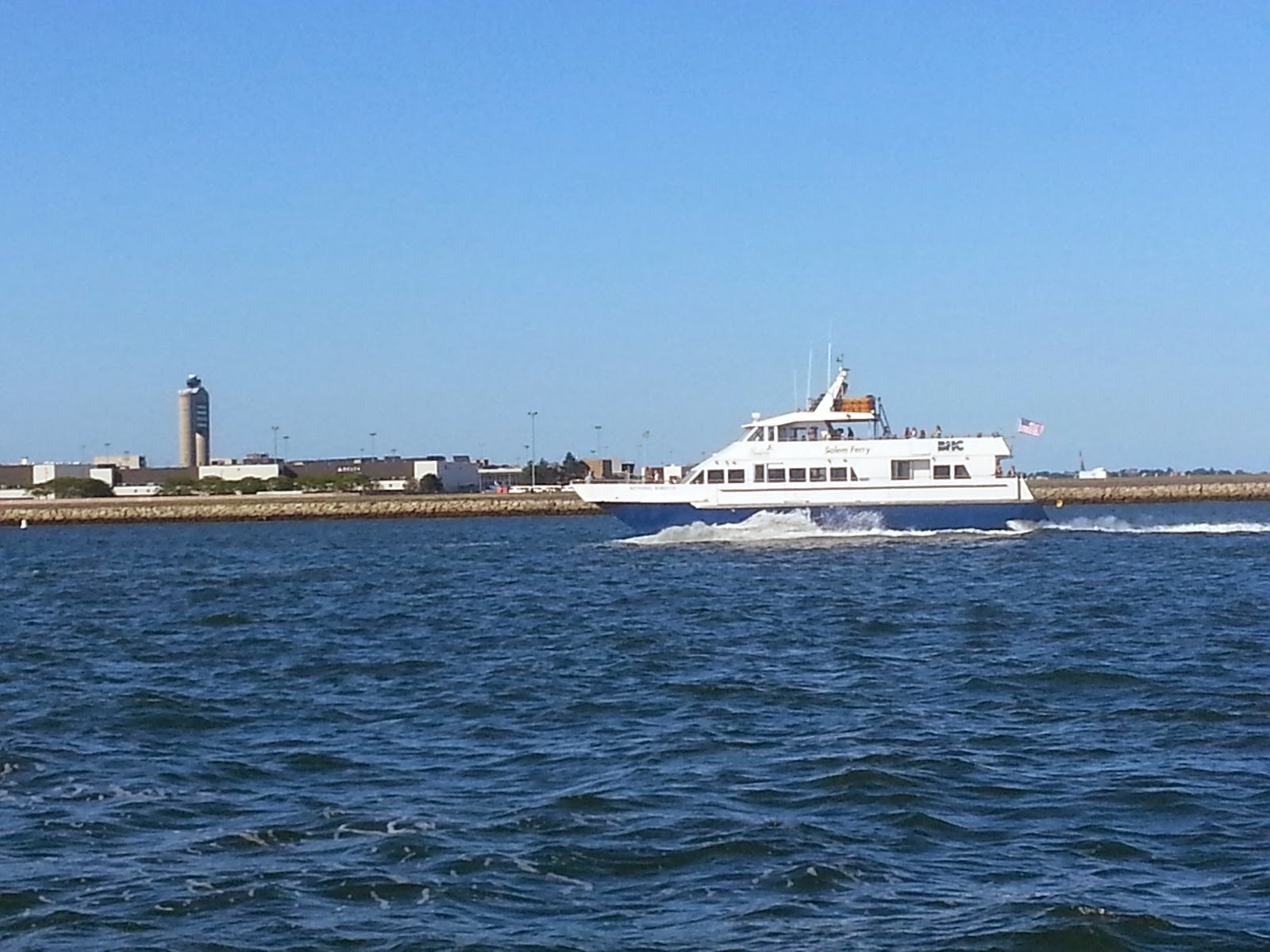 You pass by lots of boats during the trip. During our trip, this included a cruise ship, one of the many ferries, and lots and lots of personal fishing boats, too. 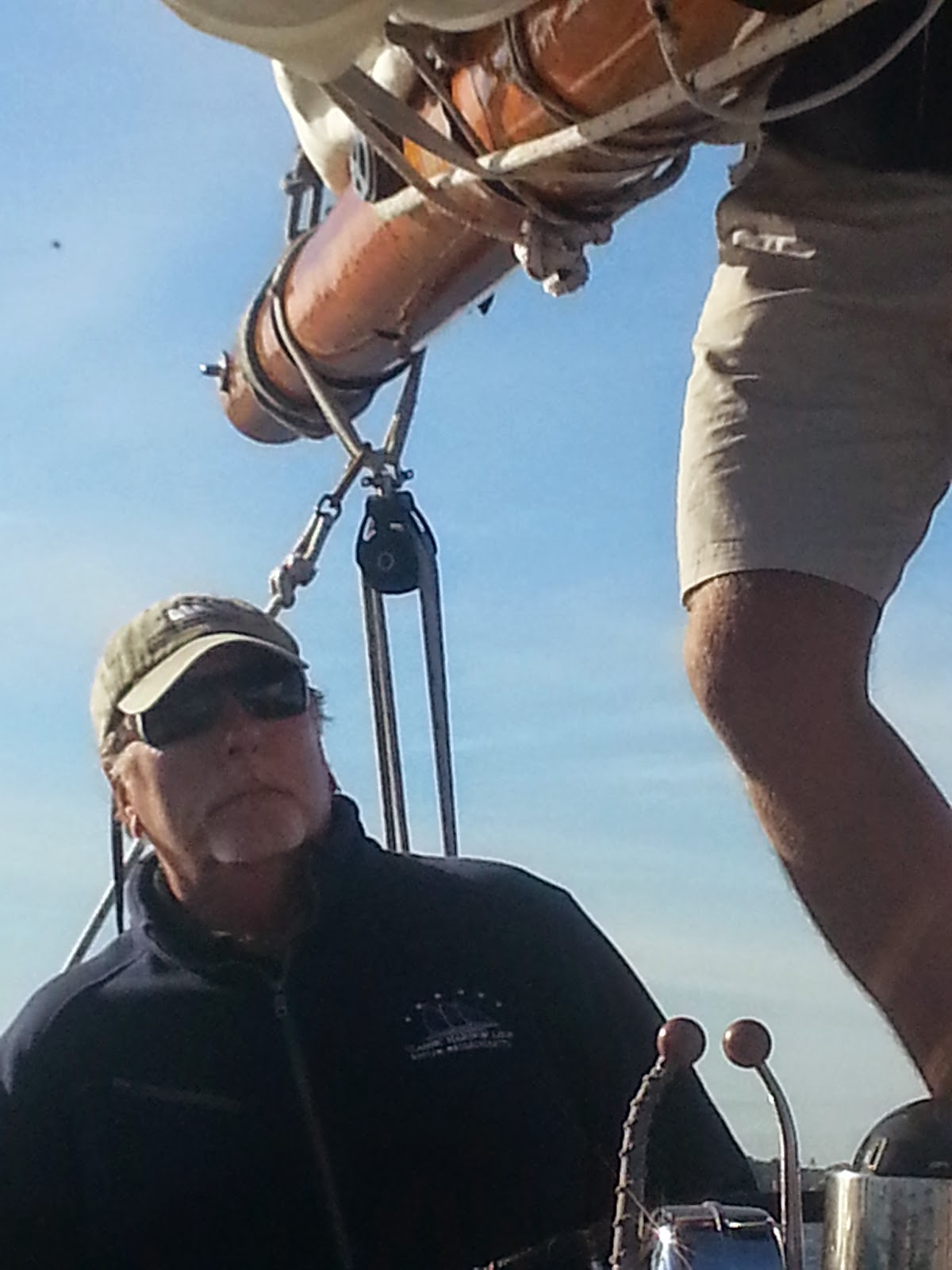 The captain is friendly enough to let you take pictures at the wheel. For some crazy reason my son had no interest in this. Actually, the whole crew is friendly. They try to tell you about the harbor as you cruise through it. If you're from out of town, it might be more informative. For someone from the area, I probably knew more, especially since I had just been over to Thompson Island, one of the harbor islands.
This is the Adirondack's second season sailing out of Boston. They're here through Columbus Day, having started in May. (Apparently, they're out of Key West the rest of the year.) If you're interested in going out on a sail yourself, tickets for the two-hour day sail run $42 a person, only $32 if you use the $10 off coupon previously posted. They also have a two-hour sunset sail for $52 and, in October, three-hour fall foliage tours for $76. The fall sails sound really appealing. 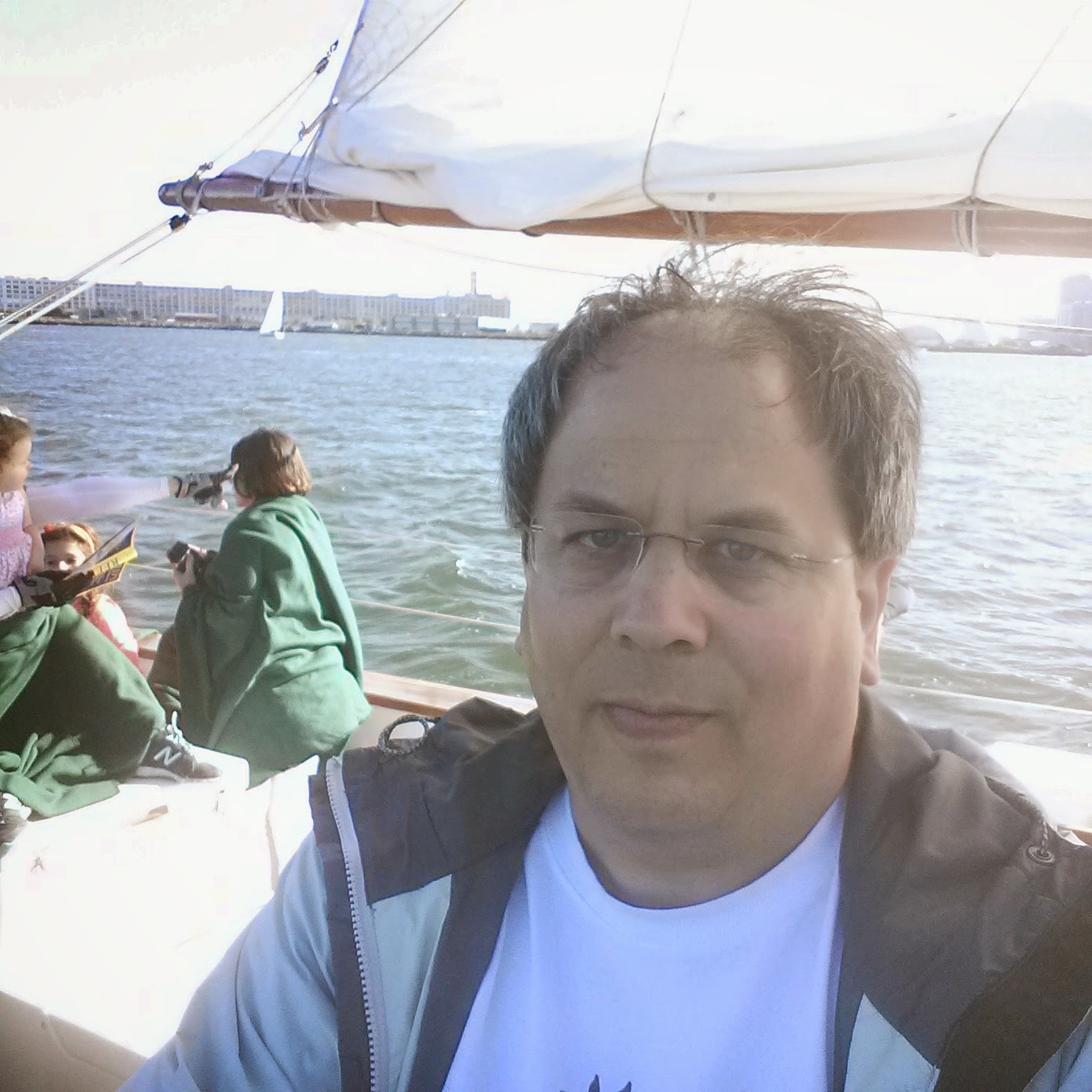 My son and I really enjoyed the trip. While he did get a little bored having to sit still for two hours without moving around too, too much, he did enjoy himself and will remember this for some time. For me, I'm super psyched I didn't puke. It was great seeing Boston from the other side in. I felt great after the trip and am eager to try out a whale watch with the family or some other water activity. I've always liked being on the water. I just didn't think I could do it. I'm really happy to say I can. I think part of that had to do with the sheer size of the boat. We did go over/through some waves with no problems. I just don't know if I'd be as fine on a 17 foot fishing boat.
Leave a Comment
submit a review Join our blog team
More Reviews of Classic Harbor Line - Boston

Proud Member of The US Family Guide Network